In Each Day, Something Good 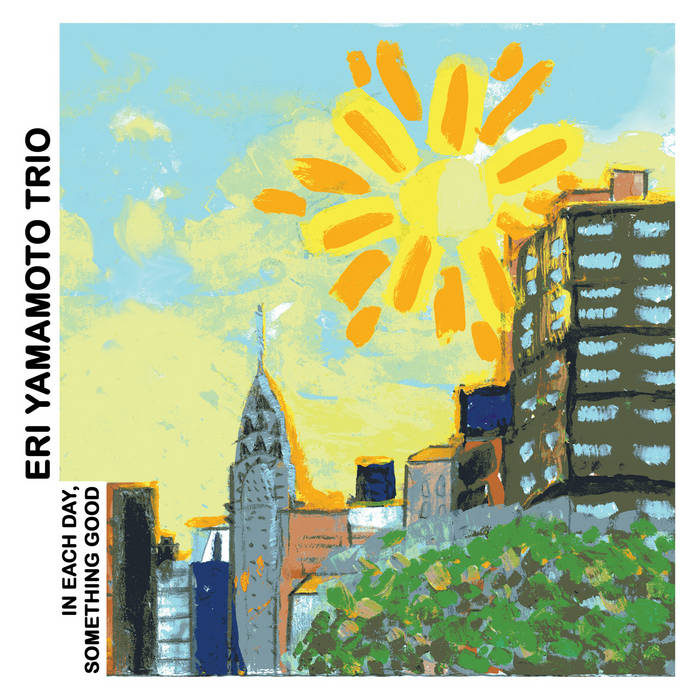 
"Another beautiful album of deep, emotionally rich original music from this pianist and her trio. A master storyteller at the keys, Yamamoto is distinctive for her warm, introspective touch, moments of joyous expansion and tunes that suck you into fully-realized worlds."
–Forrest Dylan Bryant, KZSU

The year 2008 marked pianist/composer/bandleader Eri Yamamoto's rise into the consciousness of astute jazz listeners outside of NYC. Her essential appearance on William Parker's eternal Corn Meal Dance album was followed by a pair of her own luminous and critically acclaimed albums, Duologue and Redwoods.

Yamamoto has an amazing gift for fresh and melodically indelible compositions. This live-in-the-studio album of her all-new, all-original pieces are, as part of her 3 for 3 AUM album series, nigh unmatched by her pianistic (or otherwise) peers. Once again they are all brought to life with ebullience and deep sensitivity by her long-running Trio partners, bassist David Ambrosio and drummer Ikuo Takeuchi.

Half of these pieces were composed as a new soundtrack suite to the 1932 silent film, ‘I Was Born, But...’, by Japanese director Yasujiro Ozu. The film deals with the unchanging human situation that we don't choose which family we're born into, and the problems that come with this. While Ozu's film is serious and sometimes heartbreaking, it also has lightness and humor; Yamamoto's compositions accentuate this emotional complexity. The other five pieces, equally compelling and far ranging in mood, were composed through capturing Eri's experiences living in NYC and her touring around the world over the two years preceding this album.

"Each piece shines with its own interior light." –Bill Tilland, BBC

When she is not performing out of town, the Eri Yamamoto Trio appears every Thursday/Friday/Saturday at Arthur’s Tavern, a/n historic jazz club in New York’s Greenwich Village. If you're in town when they are, make it a point to stop in and say hello!


"With its unexpected mix of Paul Bley and Mose Allison, pianist Eri Yamamoto's aesthetic encompasses the exotic, the abstractly lyrical, and the funky. You can hear just how cohesive this long-standing trio are on "I Was Born," where the joyous groove is the result of everyone feeding from the same propulsive rhythmic fire. Yamamoto doesn't try to dazzle with technique. Instead, she deliberately keeps things simple, clear and to the point, thereby achieving an earthy eloquence. Bassist David Ambrosio contributes strong lines, often using tricky double-stops with casual grace. And drummer Ikuo Takeuchi delivers the kind of support that leads the way as much as it beautifully underpins the compositions and the improvisations that follow."
–Glen Hall, Exclaim!

"Yamamoto’s playing, unhurried and unforced, nevertheless demonstrates an active imagination and gift for melody; her improvisations avoid sweeping theatrical gestures in favor of focused introspection, in the spirit of someone who stops along the way to pore over the small details of everyday life that often elude those who hurry on." –Tom Greenland, All About Jazz-New York

Bandcamp Daily  your guide to the world of Bandcamp

Featured sounds by K.Spark and WIZDUMB, plus Basi joins the show to discuss his latest release.